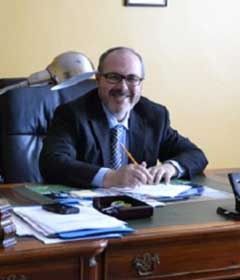 Born in Lugo, Spain, Juan Navarro grew up in a beautiful forest dense area situated in the top western corner of Spain, a region known as Galicia, home to the famous “Camino de Santiago” Pilgrimage and a foodies’ paradise due to the high quality of its fresh ingredients and its unique and tasty cuisine. During his upbringing, Attorney Navarro learned “Galego”, the native language of the region, which is a romance language that historically originated as a dialect of the Portuguese language and later became influenced by standard Castilian Spanish.

As a child, Juan Navarro attended elementary school in As Pontes, a small town located in the Province of A Coruña. Eventually, he moved to Madrid where he would complete High school and where he would attend “Universidad Complutense de Madrid”, a well-known college regarded as having one of the top law programs in Spain. At the “Complutense”, he completed his degree as “Licenciado en Derecho” (Licensed in Laws) in April of 1989. Then, upon finishing his law studies, Juan Navarro returned to his home region and registered as practicing attorney with the “Colegio de Abogados Provincial de A Coruña”, the local bar association. Shortly after, Juan Navarro spent one year serving as Sergeant in an Aizoain Army Regiment, a mountain post of the Spanish Special Forces located in the region of Navarra, near the France border.

Upon finalizing his military service, Juan Navarro moved to the United States where he would eventually get married and start a family in the State of Massachusetts. Attorney Navarro spent his first two years in this country working as a teacher for the Spanish bilingual program of the New Bedford Public Schools while he prepared to attend Law School. Subsequently, he successfully applied for admission to New England School of Law in Boston, Massachusetts, where he attended classes on a full-time basis earning his Juris Doctorate in the Spring of 1996. That same year, Attorney Navarro passed the bar exam and he was admitted to practice law in the State by the Supreme Judicial Court and the U.S. District Court for the State of Massachusetts. Four years later, he would successfully take the bar exam in Rhode Island and would become licensed to practice law by the Supreme Court of Rhode Island in November of 2002.

Attorney Navarro joined the Law Offices of G.M. Rego in September of 1996. During first five years with the firm, Attorney Navarro practiced almost exclusively in the areas of personal injury and worker’s compensation. Later in his career, he would also handle employment discrimination cases before the Massachusetts Commission Against Discrimination, as well as petitions for Social Security Disability benefits and unemployment claims. Between 2004 and 2010, a big part of Attorney Navarro’s practice was in the area of Real Estate Law. During that period of time, Attorney Navarro represented financial institutions and individuals in real estate transactions involving the purchase and sales of private and commercial property. In addition, Attorney Navarro also represented lenders in loan closings and reverse mortgages. More recently, Attorney Navarro’s practice has further expanded into the area of Medicaid Law and complex estate planning. Attorney Navarro regularly meets with families to design strategies for the protection of assets so as to avoid the inconvenience and expense of the probate process, and he assists clients who are concerned with a potential entry in assisted living or in a nursing home facility.

Due to the changing nature of government policies regarding the availability of public funding, the area of estate planning is one in constant flux. Accordingly, an attorney must keep a close eye in the latest case law interpreting the State’s rules and regulations in order to provide the clients with up-to-date information on the subject. Having a clear understanding of the applicable federal and state provisions is an essential requirement if one is to make good choices in connection with the transfer of assets and the selection of qualified investments in the estate planning field. Attorney Navarro strives to attend the most reputable conferences and symposiums on the matter to offer his clients the best asset protection options in light of the current laws and of their personal needs and goals.

Given the time sensitive nature of many of these estate planning strategies, Attorney Navarro has made it a priority to reach the local community, and the public at large, to imprint the importance of acquiring proper legal advice and to execute estate planning documents as soon as the circumstances may allow it. For that purpose, he has participated regularly in local tv and radio shows where he has spoken about the nuances of the State Medicaid laws and has answered numerous questions posed by viewers that are trying to decide what is best for them and for their loved ones.

Over the years, Attorney Navarro’s ability to speak English, Spanish and Portuguese has been instrumental in his being able to provide legal counsel to individuals from different backgrounds and ethnicities. Whereas a lot of practitioners need to rely on assistants and office personnel to address the concerns of their clients, attorney Navarro finds great value in being able to directly communicate with those that come to him seeking for advice, legal services and representation.

Attorney Navarro has also been active throughout his career in supporting and assisting the Massachusetts’ immigrant community by providing pro-bono advice at some of the local non-profit organizations and by serving in the board of directors of agencies such as Centro Latino VIDA and Immigrants Assistance Center in New Bedford, Massachusetts. Attorney Navarro has also received a Certificate of Appreciation from “Centro Presente, Inc.” for his work with asylum applicants in the Cambridge area, and a Citation of Recognition from the President of Bristol Community College for his “excellent support of the Latino community”.

Amongst Attorney Navarro’s principal interests outside of the practice of the law are his involvement in soccer and with pop/rock music. Having played soccer at a young age in Spain and having attended multiples games at the Santiago Bernabeu during his college years, attorney Navarro was also involved in the creation of the “Midnight Riders”, the first club of supporters of the New England Revolution during the inaugural season of the MLS. Later, he continued his love affair with the sport by coaching local youth teams in the Massachusetts MAPLE and MASCS Leagues and by co-founding the New Bedford Vipers FC. Attorney Navarro is also an accomplished guitar and bass player who has produced and mixed recordings of the local band “Immuter”, for which he also provides live sound engineering on a regular basis.